Female rappers have been on the come up and have taken 2021 by storm. From Coi Leray to Doja Cat to City Girls, hip-hop’s hot new female rappers are making all the noise with no signs of letting up. We lined up a list of who’s up next to blow on the female rap roster, took some suggestions from Memphis’ clairvoyant vegan NLE Choppa, polled SOHH’s millions of followers across the internets, talked to some industry folk and — with a little back and forth debating — compiled this list of the Top 10 Female Rappers You Want To Watch In 2022. Whew. Thank us next year. 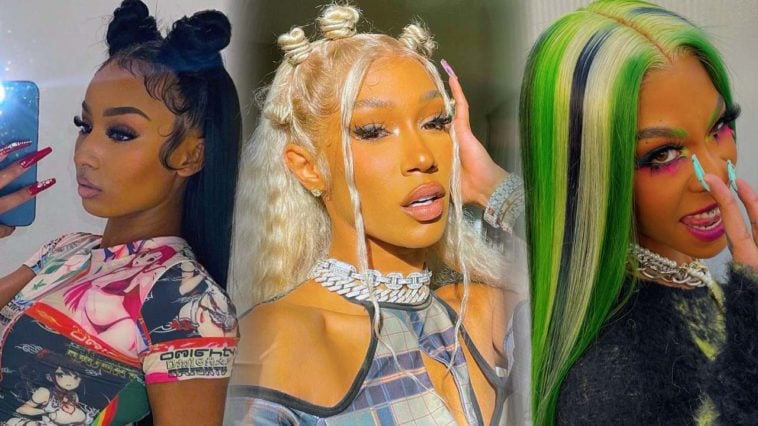 Rubi Rose is known for her sexiness, but the rapper’s deep rapping voice garners attention too. The Ethiopian-American closed out the year with the hot release, “Loyal Dick,” giving us a taste of what’s to come for the new year.

BIA, spelled ALL CAPS, has been in the game for a few years but she finally reached mainstream success with her single “Whole Lotta Money” especially when Nicki Minaj hopped on the remix. With the release of her album after that, we know the Perico Princess will be blowing up in 2022.

Rico Nasty has been on the scene with her rap-alternative music for a while and has developed a loyal fanbase. Despite having a hard time with Playboi Carti’s fans on tour this year, The DMV rapper dropped “Money” with Flo Milli and is looking to drop even more in 2022. You can find her on the Bruised Soundtrack.

Dreezy made her entrance into the scene with her song “Body” featuring Jeremih. Though her biggest release in 2021 was her verse on Asian Doll’s Nunnadet Remix” with Rubi Rose, Ivorian Doll, and Dream Doll, we’re sure the Chicago rapper has more in store for 2022.

The New York rapper DreamDoll has been consistently doing her thing and bettering her bars since stepping fully into the music industry. From being featured on the “Bruised” soundtrack to releasing a banger “You Know My Body”, DreamDoll is coming up.

Flo Milli might have released her debut album “Ho Why Is You Here” in 2020 but she’s kept herself relevant all 2021. From releasing songs like “Ice Baby” and “Roaring 20s”, we know the Alabama rapper is coming harder in 2022.

LightSkinKeisha is an Atlanta reality star and rapper that makes classic bossy Southern music. She’s been adding actress to her resume as she’s been starring in “Power Book II: Ghost.”

The model and social media personality Renni Rucci turned her fame into a rapping career that has been steadily rising. In early 2021, the South Carolina rapper dropped “Hands On Ya Knees” featuring Kevin Gates, garnering her 5 million views and counting on YouYube.

Lakeyah has signed to Quality Control Entertainment and is slowly making her name known in the industry especially with “Female Goat.” Her recent verse on Nardo Wick’s “Baby Wyd” has fans anxious for new music from the 20-year-old.

The Bronx rapper Maliibu Miitch might be known as one of Nicki Minaj’s close friends but she’s a rapper in her own right. She’s made waves this year with her single “I Like What I Like.”