Three prominent members of the popular rap consortium, Griselda, have spoken out against the horrific tragedy that happened Saturday in their hometown of Buffalo, NY.  Authorities have determined that Payton Gendron, the white shooter who carried out a horrific hate crime, had been planning the attack on the community for months. 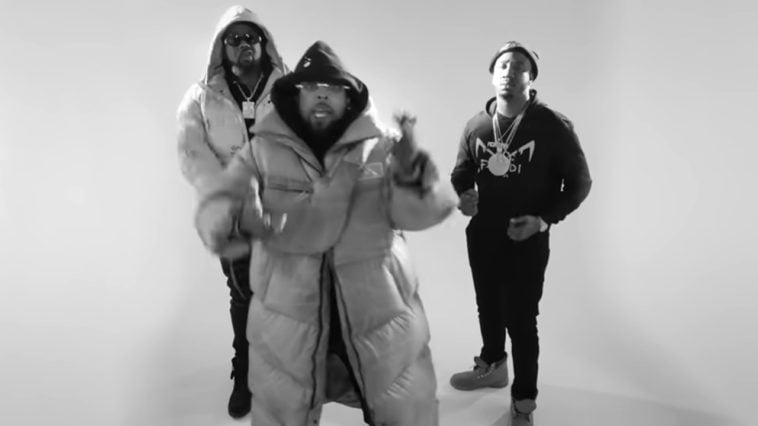 220 Views
Comments Off on Conway The Machine, Benny The Butcher, Armani Caesar Speak Up For Hometown Devastated By Racist Massacre

Conway the Machine, Benny The Butcher, and Armani Ceaser of Griselda have spoken out against the horrific racist attack by a white supremacist that took the lives of 10 Black Buffalo NY residents and injured three others on Saturday.  Now, investigators have revealed that the attacker had planned the evil plot and published his plans on the online platform, Discord, months earlier.

My heart goes out to all the families and friends of the victims and everyone that was impacted by this senseless act of racism and violence. This is beyond unfathomable 💔

Prayers up for my city!”

Meanwhile Benny the Butcher shared a photo of the victims of the shooting, prompting users to honor their memory with the caption of “Prayers for all the ones we lost and their families ❤️🙏🏾”

Armani Ceaser also shared on Instagram, “Prayers to all the people affected by this horrific event and especially to those who lost their lives or their family members. 💔🙏🏽 To my city, I’m here to help in any way that I can. Any outreach programs or charities directly linked to this cause please reach out or tag them below. 👑”

Payton Gendron, the 18-year-old white man  who murdered 10 Black people at a Buffalo supermarket, had detailed varying stages of his plans to carry out the massacre through online statements over the course of five months.

The Washington Post, after they reviewed 672 pages of messages, found that Gendron made plans as early as December to murder “replacers” — referring to the Great Replacement Theory, a white supremacist conspiracy theory where it is believed that white people will become a minority.

Many of the shooter’s messages were on the platform Discord. Gendron identified Buffalo’s Tops grocery store as “attack area 1” because of how close it is to a predominantly Black neighborhood. Two other locations in Buffalo were identified as places to ‘shoot all blacks.’ His messages would also map out routes to all locations, with exact times for shootings to occur, with an estimation that at least three dozen people could be killed.

Originally, Gendron considered going after Rochester, but eventually switched to Buffalo due to its being predominantly Black. “New plan,” Gendron posted online on 17 February, adding, “TOPS Friendly Markets” and “damn that is looking good.”

Churches and schools had been originally considered, but Gendron wrote,  “I would consider breaking into a Buffalo elementary school but those places are locked up tight plus I get a strange feeling when thinking about massacring (sic) children,”

Stephen Belongia, FBI agent, had indicated on a call with other officials on Monday that investigators are looking at Gendron’s Discord activity.  There were posts as far back as last summer regarding body armor, guns, and others last month where he taunted federal authorities.

The Washington Post published an extensive journal where Gendron detailed killing and mutilating a cat and wrote about being taken for a psychiatric evaluation after announcing in class that he planned on “murder/suicide.” He then admitted that it was dropped when he said that it was a joke to get out of class.

“That is the reason I believe I am still able to purchase guns,” he wrote. “It was not a joke, I wrote that down because that’s what I was planning to do.”

The Post’s investigation also discovered that in November, Gendron posted a copy of a manifesto to Discord. The manifesto originated from Brenton Tarrant, an Australian white supremacist who killed 51 Muslims in 2019. In a separate 4chan message board that month, Gendron claimed to be the author of an anonymous post claiming “a brenton tarrant event will happen again soon.”

On 5 December, he wrote, “I will carry out an attack against the replacers, and will even livestream the attack.”

More messages written by Gendron revealed that he went to the Tops supermarket repeatedly in order to scout out the store. “Many” Black people inside the store, including two security guards who were carrying pistols, according to his posts. He described an incident in which he was confronted by one of the guards after he had entered the store three times in a day.

“I’ve seen you go in and out … What are you doing?” Gendron remembered the guard saying.

“In hindsight that was a close call,” he would add later on and detailed having a panic attack as he drove back from the store, eventually crashing his car into a pole. In March, a speeding ticket notice issued to Gendron arrived at his parents’ home. “[N]ow my dad knows I was hours away doing something I shouldn’t have,” wrote Gendron.  He lied to his father by saying skipped school to go hiking that day.

The Post’s investigation noted Gendron taking advantage of law enforcement’s apparent disinterest in him. “[H]mm I wonder why the FBI isn’t tackling me right now? probably because they want it to happen,” he wrote in April in a post that featured pictures of guns.

“Mass shooters are not mentally ill.  They have an evil mentality,” wrote Cardi B on Twitter yesterday, in response to the Buffalo supermarket shooting Saturday.

The superstar rapper has often used her voice to speak on societal issues, recently speaking out about Ukraine and sexual assault. In 2019, she spoke up against the  El Paso Walmart shooting. Cardi resorted to her Instagram page in the attack’s aftermath.

Payton Gendron apparently planned the mass shooting that killed 10 people and injured three others at a Buffalo, New York supermarket on Saturday. He scoped out the supermarket the day before, belying any assertions of mental illness.

According to authorities, the assault-style rifle used in the attack was legally purchased in New York.  A hunting rifle and a shotgun were also found at the scene. Gendron also had multiple 30-round magazines containing over seven bullets, outlawed in New York state in 2013.