This has been a sobering week, with a massacre of 19 children and two teachers in a Texas elementary school.  An act so jarring, Kanye West, a father of four himself, postponed the launch of his Yeezy Gap Collection. 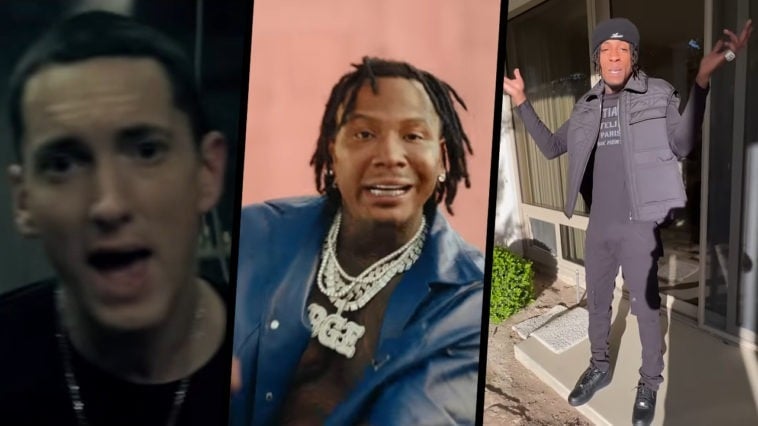 290 Views
Comments Off on Eminem Gives Us An Extended Version, XXXTentacion And Kanye’s Love, Chance The Rapper Back With Bars

At SOHH, some of us parents and all of us humans – struggled to do the usual stories – nothing seemed important enough.  So we from our lens, with a story on the response from some of the most important voices in Texas hip-hop including Trae Tha Truth, Saweetie and Slim Thug, and a hopeful tone with Barack Obama, Lil Dirk, and Travis’ Scott all planting the seed for strong future leaders.

On a lighter note, check out our epic feature on “How They Nabbed Young Thug, Gunna and YSL” as we go behind the lyrics used to indict them.  And we explore how Jack Harlow, a white rapper from Kentucky, finessed hip-hop fans using digital blackface, a bag of cash, and performative allyship.

Let’s get to what you came for.  Enjoy your Memorial Day weekend.

There are definite things in the world: death, tax, and a decent album from Eminem. The OG pulled a Back to the Future with this, giving us an extended version of his 3rd album for the ages: The Eminem Show. It’s been 20 years since this album dropped. This album includes unreleased songs and instrumentals.

XXXTentacion’s track featuring Kanye went hard. The new song, “True Love,” dropped this week simultaneously with the late rapper’s documentary on Hulu.  Some people have mentioned the doc felt “incomplete.” What do you think?

Moneybagg Yo – See What I’m Saying

The Lobby Boyz – Self Titled

NBA Youngboy – Proud of Myself

Maybe he is sending a subliminal, maybe it is just a song, maybe YoungBoy is affirming himself. Maybe it is not any of this but you should give his new song a listen.

Chance the Rapper – A Bar About A Bar

Word play on steroids from Chance.