The first song on the list is a throwback for the OGs and a reminder for the newbies of how Usher stole everyone’s heart. That’s not all. Nicki Minaj also took time away from battling trolling bloggers to jump on BLEU’s new song, “Love In The Way.” Have a fun Friday as you jam to these songs from EST Gee, Symba, and more. 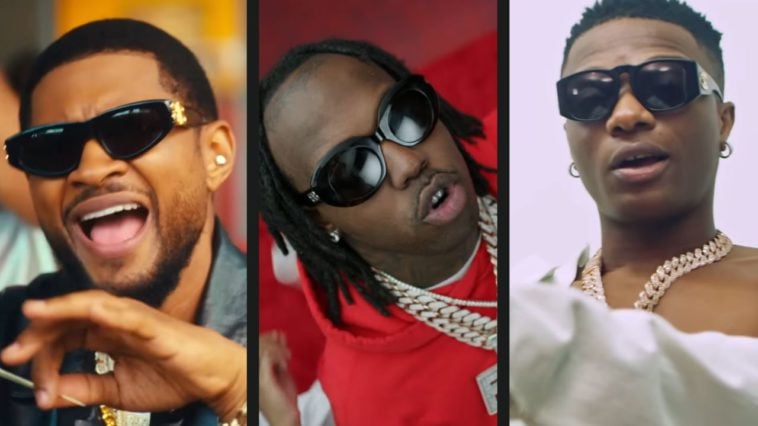 In its silver jubilee year, Usher decided, why not go back? Why not just remind us all how it all started?

The deluxe version of the My Way album features all the original songs with “exclusive, reimagined tracks.”

One thing this album will leave you with is an appreciation for how Usher has grown and remained relevant for decades.

CMG is CMGee-ing! They stay winning.

The artists are churning out music at a great rate, including new signee 10 Percent.

While Moneybagg Yo collaborated on multiple features, EST Gee was cooking his latest album, I Never Felt Nun.

Does EST Gee feel anything, though?

Fans would surely love this album, especially, if they enjoyed the previous ones.

Symba knows the drill, and understands that success results from a sustained grind; it takes time.

The rapper, whose sound is featured on NFL: Madden, collaborated with DJ Drama to create this masterpiece of a mixtape.

Produced by ATL John, the song fuses the strength of each rapper’s vocals, creating an almost-seamless listening experience.

This surprise two-song drop is just on brand for Kodak.

Yak goes out of his way to be chaotic and refuses to follow the herd.

The 25-year-old rapper has found his sweet spot, perfected his flow, and delivery that he’s ready to serve to fans.

The song is available for streaming everywhere and not a bad way to close his summer business.

The “Super Freaky Girl” rapper has teamed up with Alabama rapper Bleu to present a new slow jam, “Love in the Way,” and it’s fire.

Wizkid – Bad To Me

Jam to it, let us know what you think. The Afrobeat King is at it again.

Also, be sure to give a listen to Little Dragon and JID’s “Stay,” and Ab-Soul’s “Moonshooter.”