Daniel Kaluuya rose to prominence after his portrayal of Chris Washington, a Black man who meets his girlfriend’s white family for the first time, in Jordan Peele’s “Get Out.” 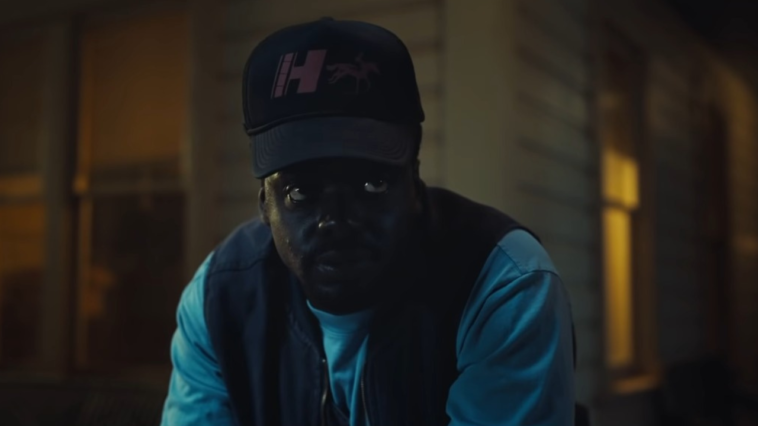 He would go on to portray W’kabi, the head of security for Wakanda’s Border Tribe and best friend of the late Chadwick Boseman’s T’Challa in the Marvel film “Black Panther.”

After nabbing the Academy Award for Best Supporting Actor for his portrayal of Fred Hampton in Shaka King’s 2021 biopic “Judas and the Black Messiah”, many wondered what Kalyuua’s next move would be.

A horror film based on the beloved purple dinosaur probably was not one of them.

He recently spoke with the Hollywood Reporter to offer insight on what gravitated him towards the “I Love You, You Love Me” icon. The London-born actor stated:

“My last number of films have been so aligned to kind of what I stand for as a man. But there are a whole lot of things that I do as a man. I love kids’ films. How did everyone get into films? Watching kids’ films. I don’t want to restrict myself to the limitations of what I’m perceived as.”

As early development is underway, there hasn’t been any word on who will be working on the project alongside Kalyuua just yet, but it will be developed under the banner of 59%, the production company he co-founded with “X-Men” actor Michael Fassbender.

It was after watching an episode of the genre-bending Netflix original Black Mirror that starred Daniel entitled “Fifteen Million Merits” that made Jordan Peele cast him in the lead role of Chris in “Get Out.”

The two have reunited for this year’s highly anticipated Nope starring Keke Palmer and Steven Yeun.

During the tell-all with THR, the Mad TV and Key and Peele comedian-turned-filmmaker gushed about his time working with the Oscar-winning actor.

“Daniel is my all-time favorite actor, and having worked on a couple of things apart and then coming back together, it just was a reminder of this special working bond that we have together…I utilized the fact that Daniel is just so immensely watchable, and he has this powerful stillness to him.”

Daniel’s performance earned him his first Oscar nomination for Best Actor and earned Peele’s first nomination and eventual win for Best Original Screenplay. In Nope, Daniel plays a Hollywood horse trained named OJ Haywood. After his father dies from unknown causes, he meets up with his sister(Palmer) to find some answers. Nope hits theaters on July 22, 2022.

According to Variety; the award-winning actor will not be returning to “Black Panther” as W’Kabi in Ryan Coogler’s sequel to the 2018 Marvel film.

This is partly due to scheduling conflicts while the actor was filming Jordan Peele’s latest horror, “Nope.”

Other actors from the three-time Oscar-winning blockbuster are set to reprise their roles, including Florence Kasumba, Dorothy Steel, Danny Sapani, and Issach de Bankole. “Black Panther: Wakanda Forever” is scheduled to be released on November 11, 2022.