These ladies are in their bags this summer. From new albums to new projects – they cannot be stopped. 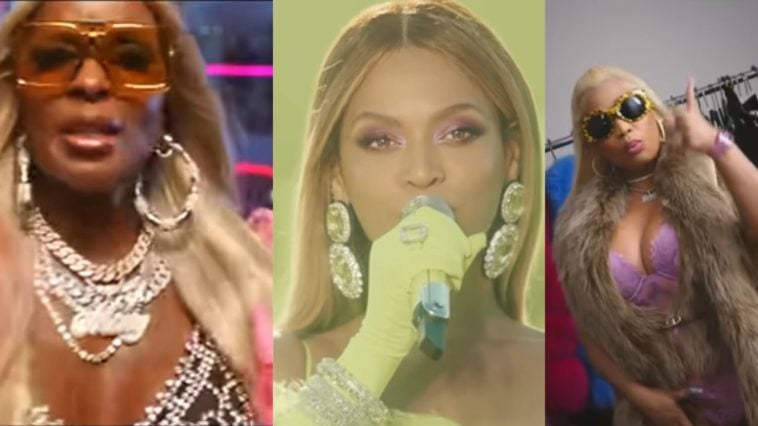 Beyonce Takes Vogue As She Gears Up For New Album

Queen Bey sent the Beyhive into a frenzy when she deleted profile pictures across social media.   Beyonce then shocked the world with the announcement of her new highly-anticipated album “Renaissance” set to be released July 29.  Of course, to celebrate the new project Queen Bey graced the cover of Vogue UK, reclaiming her throne.

Nicki Minaj will be double-booked this fall, making headline history at the iHeartRadio festival. The Barb herself is also set to be the first female rapper to headline Rolling Loud New York.  The music festival rolls out at Citi Field in Queens, NY September 23-25th. Tickets are on sale now!

Mary J. Blige put on an incredible performance at the Roots Picnic 2022. The Queen of Hip Hop Soul is ready to hit the road, taking to Instagram to announce the Good Morning Gorgeous tour is set to kick off this fall in North Carolina. The tour will also include R&B singers Ella Mai and Queen Naija. Tickets are on sale now.

Chloe Bailey is coming in hot this summer, recently turning heads at the legendary Hot 97 Summer Jam concert. She keeps the momentum going, gracing her fans with her newly anticipated single “Surprise” which quickly went viral on social media.

Cardi B is in her shoe bag, with a two-part collaboration with Reebok. The Bronx baddie took to Instagram to announce the official release. The cute, pastel-colored kicks can be found here.

Many fans are still reacting to Megan Thee Stallion refusing to back down after an unforgettable interview with Rolling Stone. Let’s shine a light on the Houston Hottie’s breathtaking looks for the cover.

Janet Jackson never misses a chance to show fans she’s still got it. The music mogul graced the cover of ESSENCE, and set to put on an iconic show at the ESSENCE festival this summer!

Yung Miami just dropped her new podcast, and now she teamed up with Gucci Mane and Quavo on the new hit single “First Impression.”

Since going full cosplay, Flo Milli is celebrating Black Music Month in style. Her new bop, “Conceited”  is giving a 90’s vibe and fans are loving the new track.

Lakeyah is gearing up the fans for the summer, and she’s back with a new anthem. “Record Straight” proves why the ladies are taking over!

Texas rapper Erica Banks is proving why fans need to take back calling her “entitled.” She just dropped her new project, “Diary of The Flow Queen,” and the hit single “Nasty” is already a fan favorite.