The wait for Pharrell’s follow-up to his first festival debut of “Something In The Water” back in 2019 may have taken longer than expected due to Covid, but overall it was worth it. 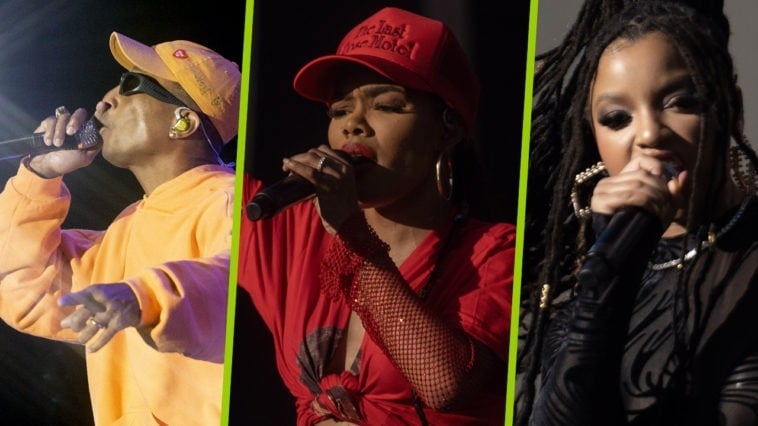 264 Views
Comments Off on Top 5 Moments From Pharrell’s “Something In The Water” Festival In Washington, D.C.

For the first time in three years, “Something In The Water” came back with a bang to our nation’s capital as opposed to where it all began: Pharrell’s hometown, Virginia Beach.

Music lovers came from all over the globe to celebrate Juneteenth and Father’s Day weekend at Pharrell’s three-day festival.

Furthermore, The festival’s original location was changed due to the tragedy of Pharell’s cousin Donovan Lynch, who was killed by a police officer in Virginia Beach.

The switch-up from a sunny beach to the hustle and bustle of the city changed the feel of the event. It also brought along a few challenges that Pharrell and his team may need to address for future festivals.

Logistically, the festival felt unorganized enough to address the influx of people for everyone to roam the grounds freely.

Despite enjoying the acts, there were two main complaints many festival-goers had. First, the festival location didn’t allow people enough room to travel comfortably between the stages, vendors, and merch. Imagine 50,000 ppl trying to fit on 150 ft wide streets in the middle of a hot D.C. day.

Moreover, it was congested with so many people which made it almost impossible to catch acts at different stages. Secondly, the location of the stages did not make for the best audience listening experience.

The Sun and Earth stages were too close, adding congestion to the traffic between sets. The proximity of the stages made it difficult to enjoy a performance without hearing the noise from the other stage, depending on where you were standing.

As far as safety, the festival did an excellent job of offering extra water and places for shade. In addition, despite the influx of people, there wasn’t any violence. Pharrell said during the festival that his goal was to “Uplift” the people by ensuring everyone was safe.

Pharrell halted his performance twice to ensure a passed-out fan left safely. He also checked in on the audience while many were dehydrated and tired from being in the heat all day.

Teyana Taylor also stopped during her set to ensure a fan left safely. The festival made it a point to prioritize the health and safety of the general public. The biggest issue I saw regarding safety was pickpockets. One woman was caught in the crowd with a bag of over 30 phones in it.

Her face went viral on Twitter after someone recorded her; however, she faced no consequences for her actions. Unfortunately, thieves took advantage of the heavy congestion to steal valuables in the crowd. My phone was also stolen on the second day while trying to shoot the festival.

They Came, They Saw, They Conquered

Despite the various issues Something In The Water faced, the artists came, and they conquered. Pharrell curated a festival with top-notch artists going back to back, calling in many fan favorites in Rap, R&B, Afrobeats, Pop, Reggaeton, and Gogo.

There were so many dope moments on stage. D.C.’s rich culture was displayed heavily as Justin Timberlake attempted to “Beat his feet” and stage DJs played lots of gogo between sets.

BIA got fly and reminded us to look like “A Whole Lotta Money,” Lil Baby and Moneybagg Yo both went crazy and lit the stage up. Many dope moments happened during the festival; however, here are my Top 5 moments from Something In The Water 2022.

Teyana Taylor graced the stage and looked terrific with the abs to match. In addition to her vocals, her dance breaks went crazy, and she and her dancers tore the stage up with their routines. During her set, Teyana also brought out her beloved daughter Junie. Junie was a star on stage; she owned her solo.

The mother-daughter duo sang their song from Taylor’s last album, “Come Back To Me” As soon as Junie hit the stage to close out Teyana’s set, the crowd went wild, yelling her name.

Junie and her mother sounded beautiful, and she was adorable, singing her heart out into the mic while fans in the audience sang to the top of their lungs with her. This will be one of the best mother-daughter moments Teyana will have to cherish and treasure forever.

Justin Timberlake may not be from D.C., but that didn’t stop him from trying to do a popular dance here called “beat your feet” to pay homage to D.C. culture on stage.

The video of Justin dancing on stage to go-go then saying “I’m about to beat my feet,” then proceeding to do an unfamiliar dance while “Beating his feet” has already gone viral on Twitter, and people from the D.M.V. area find it to be hilarious and are clowning him online.

While many native Washingtonians appreciate the recognition of the culture, it was still funny to watch him do the dance completely wrong and see the crowd still cheer him on. However, Justin still had a great set, and seeing him posted up with Pharell and T.I. on stage was an iconic moment that will go down in history.

During Pharrell’s set, he was joined by superstars T.I., Justin Timberlake, and the reunion of No Malice and Pusha T as the Clipse.

Pharrell also held down the stage on his own complete with a fleet of talented dancers backing him who were killing it. The crowd went beserk when Pharrell, Malice, and Pusha T hit the stage together. Everyone yelled the lyrics to “What Happened To That Boy” while rocking band and forth to the old school. Pharrell’s set felt like a heartwarming family reunion.

Everyone was just genuinely having fun, reuniting on stage, and we got a chance to be a part of it.

Chloe x Halle’s performance trended on Twitter after fans could see Halle’s growth as a performer, and their angelic voices blended as a duo and serenaded the entire audience.

As they sang songs from their 2020 album “Ungodly Hour,” including “Ungodly Hour” and “Forgive Me,” seeing the fire and ice chemistry between the two was captivating. Halle’s gentle and calm spirit and Chloe’s fiery aura made for the perfect pairing combined with their powerhouse vocals and trained technicians.

You could feel their genuine love for one another on stage through the music, and how they performed as a duo, complementing each other’s voice and presence, it was beautiful to see and hear.

Lil Uzi’s set was one of my favorites because his energy is on 100 every time. Uzi performed his best hits, including “Money Got Longer,” “Sauce It Up,” “Neon Guts,” and more.

The Philly native may be small, but his big personality filled the entire space. The performance involved the audience jumping up and down to the beat while Uzi always gave back that same energy. Uzi asked one fan to come on stage and get lit with him, and the young man came, and he was nervous at first, then went wild.

He even dapped Uzi up before leaving the stage. The entire audience was roaring as they watched him and Uzi on stage.