Thirty-one White men have been arrested with conspiracy to riot near an Idaho pride event. They have been identified as members of the Patriot Front, a well-known White supremacist group. 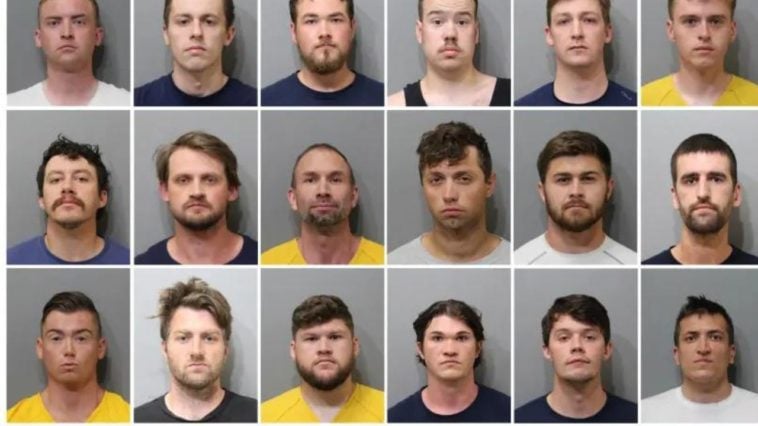 Police received an anonymous tip from someone that saw the Patriot Front members load up into a U-Haul like “a little army” near an Idaho pride event.

The members were booked on misdemeanor charges of conspiracy to riot. One of the more notable men was Thomas Ryan Rousseau, who has been identified by the Southern Poverty Law Center as the 23-year-old who founded the group after the deadly “Unite the Right” rally in Charlottesville, Virginia, in 2017, as reported by Politico.

CNN reported that all 31 individuals were from outside the local area.  According to a booking summary from the Kootenai County Sheriff’s Office, only two men were from Idaho.

Mayor Hammond is unsure why they picked this particular pride event. He has stated that they thought they could “get away more” in a smaller community like Coeur d’Alene.

The group was dressed alike, wearing khaki pants, blue shirts, and hats, Police Chief White said. The men were also equipped with “shields, shin guards and other riot gear,”  as well as plans “similar to an operations plan that a police or military group would put together for an event.”

“It is clear to us, based on the gear that the individuals had with them, the stuff they had in their possession in the U-Haul with them, along with paperwork that was seized from them, that they came to riot downtown,” White said.

The men had logos on their hats “consistent with the Patriot Front group,” and some were wearing arm patches associated with the organization, White said.

Meanwhile, white supremacist hate crimes are proliferating across the country. Recently, Cardi B used her platform and took to Twitter to speak out about a mass shooting by a white supremacist.

The “WAP” rapper didn’t want the mentally ill community to be demonized after the May 14 cowardly racist attack by Payton Gendron. She tweeted:

“Mass shooters are not mentally ill.  They have an evil mentality,” in response to those who would assert that Gendron killed 10 black people in a Buffalo supermarket due to mental illness.