Katie Wright, the mother of 20-year-old Daunte Wright who was slain by police, is calling for the firing of a Brooklyn Center, Minnesota police officer. She said that the police officer tried to arrest her for simply filming a traffic stop. 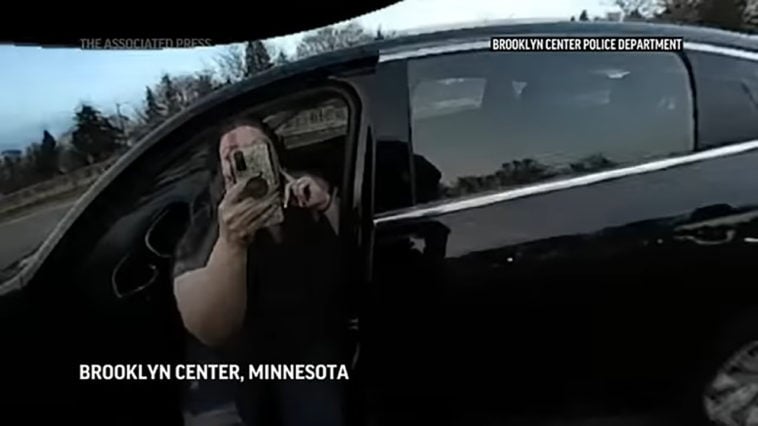 Katie Wright, mother of 20-year-old Daunte Wright, is calling for the firing of a Brooklyn Center, Minnesota police officer. She said that the police officer tried to arrest her for simply filming a traffic stop.

Wright pulled over her car and started to film someone being arrested several lanes away.  She recorded the interaction on Facebook Live while being confronted by officers for filming.

An officer crossed multiple lanes of traffic to tell Wright to stop recording. CNN reported the officer informing her, “You’re going to give me your driver’s license or I’m going to take you to jail for obstruction.” He then placed his hands on Wright’s wrist and took away her cell phone.

According to the ACLU of Minnesota, “You have the right to record police actions as long as you do not interfere with their activities and are not breaking any other law.”

In the video, Wright can be heard responding to the officer, “You know who I am right? You guys killed my son and I’m gonna videotape it.” Then she pointed in the area of the traffic stop. “And if you take me to jail, I’m going to sue you.”

Wright reported that she has an injured wrist but is otherwise okay, according to her Facebook post.

Mayor Elliot Speaks On The Issue

When speaking to CNN, Brooklyn Center Mayor Mike Elliott said “I’m really sad to see how Ms. Wright was treated.” He then added that it  “seemed unnecessary to approach Ms. Wright,” and “whatever was happening in the police situation that they were dealing with, had largely subsided.”

Elliot also commented that Ms. Wright is helping lead the city’s efforts to find alternatives to 911.  The mayor also informed CNN that the officer is under investigation.

On Thursday, a statement was released by the city of Brooklyn Center and had been read in part.

“While assisting another agency on a high-risk stop as part of a homicide investigation, there was an encounter between Katie Wright and Brooklyn Center officers.” The city released the body camera footage “in an effort to promote public safety and dispel widespread rumor or unrest.”

Wright is calling for the officer to be removed from the force.

“I don’t want a police officer like that patrolling our community,” Wright said. “He escalated a situation that didn’t need to be escalated. I was only doing what was right and what everyone else should do.

Kim Potter Will Serve Only 2 Years In Prison

A jury found former police officer Kim Potter guilty of first-degree and second-degree manslaughter in the deadly shooting of Daunte Wright. She is now only the third police officer to ever be found guilty on charges related to an on-duty death in the state of Minnesota.

However, she was sentenced to only two years in prison, causing outrage nationwide.