Early this afternoon, Young Thug had his bond hearing before a judge at the Fulton County court. Testimony was given by a stellar lineup of witnesses, including music executive Kevin Liles. He offered a teary testimony in which he confronted the question of rap lyrics being used in legal cases to convict artists. 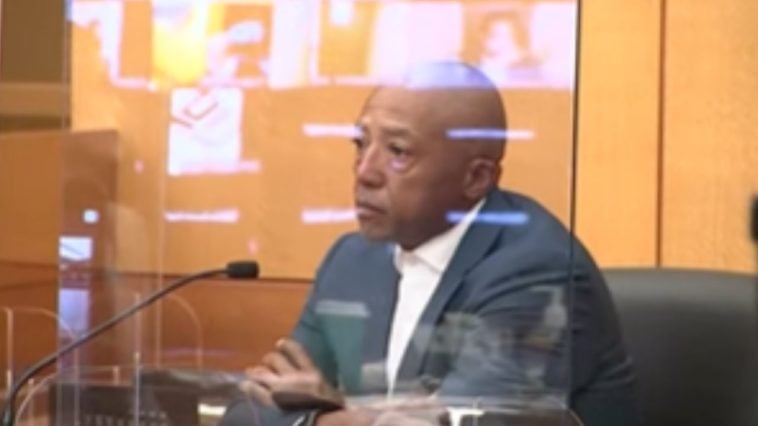 329 Views
Comments Off on Kevin Liles Teary-Eyed Testimony For Young Thug’s Freedom: “I’m Willing To Back Him Personally And Professionally”

With teary eyes, legendary music executive Kevin Liles testified to why Thug should be free on bond at a Fulton County courthouse.

Young Thug’s lawyer, Brian Steel, called on Liles to give testimony to the rapper’s character, real name Jeffrey Williams. Liles took the stand wearing a gray suit and proceeded to speak as his eyes welled up with tears.

When asked if Williams can be trusted to fulfill his bond requirements, Liles said “I’m willing to back him personally and professionally” indicating that he would put his own money up to help Thugger go free.

Liles also testified to Thug’s generosity saying, “The Jeffrey I know, will give you the clothes off his back.”

He continued, “I’ve been in this music for 38 years, and for the life of me I don’t understand why I have to testify of the good hip-hop has done in the world. “

Liles also defended the lyrics in rap music. “I believe in self-expression, I believe we should protect black art,” he said.

Besides Liles, testimony was given by a community activist and a 15-year-old-boy who was impoverished before he met the rapper. Steel also stated that Lyor Cohen “put his reputation next to Mr. Williams.”

In the filing for today’s hearing, Young Thug’s pastor,  Bishop M. Jeffries Bey, made a plea for mercy, citing Matthew 16:18 and blaming “white supremacy” for Young Thug’s plight. In his filing, he stated his support for Thugger, who he called a “parishioner” and warned  “…this case has the potential to ultimately result in a miscarriage of justice on our watch….”

Gunna was denied bond and will remain in jail until his trial. The trial has been set for January 2023.

The prosecutors argued that the “Drip Season” rapper is a “documented gang member”, adding that he, alongside Young Thug, would “direct troops” to commit acts of violence. The biggest concern for Judge Glanville is witness tampering.