A bond hearing for rapper Young Thug has been scheduled for Thursday morning at the Fulton County courthouse to determine whether he will be released while awaiting trial.  The hip-hop artist was charged with conspiracy to violate the RICO act and participation in criminal street gang activity. 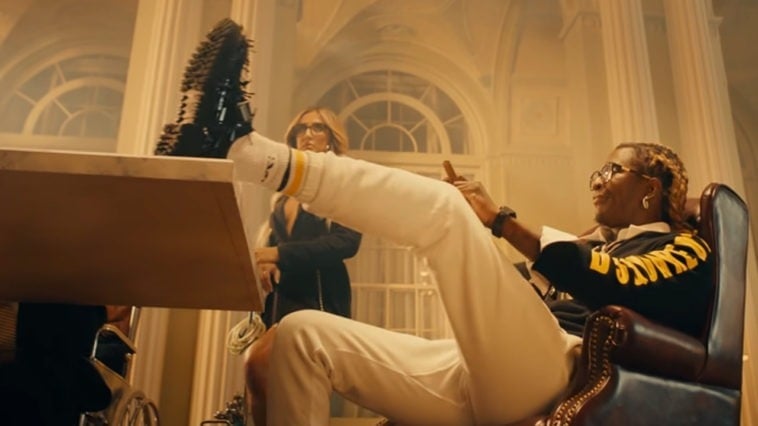 According to the Fulton County clerk, Young Thug will have a bond hearing on Thursday morning to determine whether the rapper will remain in jail while he awaits trial on numerous counts of racketeering and criminal activity.

Fans on social media remain hopeful for the rapper with many expressing support online. On Twitter, a user identified as @Twinnty1 had an interesting outlook on the possible outcome from Thugger’s bond hearing on Thursday morning he tweeted, “So Young Thug is going for another bond hearing? It’s be wild and telling if they give him bond after killing everyone else’s..”. Prayers up for Young Thug.

What has been a main topic of discussion is the state of Georgia’s decision to use the lyrics of songs by YSL artists as grounds for prosecution against them in court. The staff at SOHH.com explains each instance where lyrics are used in the indictment against YSL.

The 88-page RICO indictment against rappers Young Thug and Gunna’s “YSL” gang contains song lyrics being used to prosecute them and dozens of alleged associates. The RICO indictments say the gang openly and brazenly displayed, professed, and promoted illegal activities via lyrics and music videos.

These activities include the possession of contraband firearms, murder, intimidation, assault, and robbery. The lyrics in each song provided investigators with detailed and specific facts that they linked to specific crimes.  And when they swept the gang on May 12, prosecutors seized actual physical evidence to prove the rap lyrics were more than just entertainment.