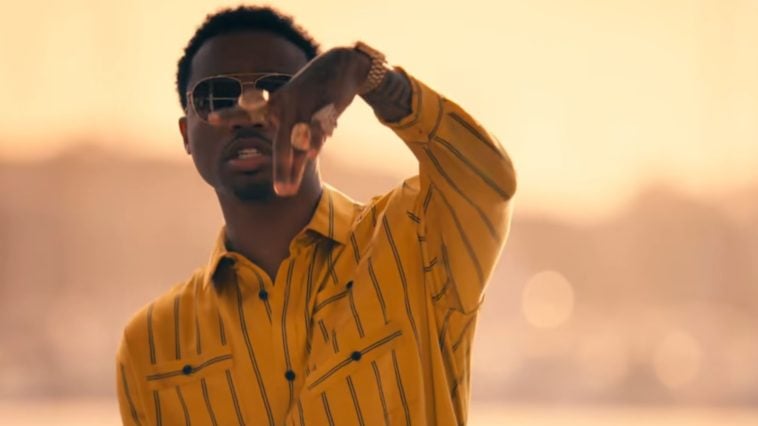 Roddy Ricch is currently waiting to see a judge after being arrested last night for gun possession.  The LA rapper was arrested just hours before his scheduled performance in New York City today (6/12/22) at the Governors Ball music festival and Hot 97’s Summer Jam.

Roddy Ricch and two other men were stopped at a security checkpoint at Citi Field where the concert was held.  A private security guard spotted the gun in the vehicle and immediately informed local police. Police found a loaded gun with more than five rounds of ammunition and a high-capacity magazine in the vehicle.

According to reports, Moore is currently being held at Queens Central Booking waiting to go before a judge which makes it highly unlikely that he will get a bond hearing in time to make his performance tonight at Summer Jam.  Summer Jam already has a gaping hole with the loss of headliners Young Thug and Gunna after they were arrested on RICO charges weeks ago.  Both men have been denied bond and will remain in prison until the trial date set for January 2023.

Following the arrest of “The Box ” rapper, the official profile for the Governors Ball took to Twitter to announce Roddy’s set being canceled, providing no additional details to fans.

“Unfortunately Roddy Ricch is no longer performing today,” they wrote.

The Governors Ball has experienced multiple unexpected cancellations this weekend. With the rumors of a group split, The Migo’s pulled out of the music festival early and were replaced by Lil Wayne, who then missed his set due to flight disruptions.

The redundant arrests of rappers across the country is causing a domino effect of gaping holes and rush replacements in summer festival lineups.  With Young Thug and Gunna currently incarcerated as they await trial this January on RICO charges, the impact is evident on the lineup for “The Biggest Hip-Hop Concert In The World” – Hot97’s Summer Jam.  The event, happening this Sunday (6/12/22) at MetLife Stadium, will feature a stellar lineup including Fivio Foreign, Lil Durk, Lil Baby, Pusha T, and The City Girls but the absence of the superstar rappers leaves a huge gap on the flyer, where the two still occupy the top billing.

Earlier this month, Young Thug had his bond hearing before a judge at the Fulton County court. The question of his bond was discussed at length with testimony from a stellar lineup of witnesses including music executive Kevin Liles, a 15-year-old motivational speaker, and community activists who all vouched for the embattled rapper’s release. In spite of it all, the judge denied the rapper’s bond, citing concerns about Thugger being a danger to the community, witnesses, and to other people in this indictment.

Judge Glanville began his closing statements by warning against any outbursts in the courtroom.  He then cited testimony from proffers– or witnesses – who stated Thug is indeed the leader of the YSL gang and that he is dangerous. The judge also referenced a group chat from 2015 in which threats were made to kill anyone who talked to authorities about the gang’s activities.

Thugger, Gunna, and 26 other YSL members were named in a RICO indictment for murder, assault, robbery, and more.  Gunna was also denied bond and will remain in jail until his trial. The trial has been set for January 2023.