The new girls on the block are taking over the music industry, proving why they now deserve the spotlight. While those who’ve been around continue to prove once again why they’re here to stay! 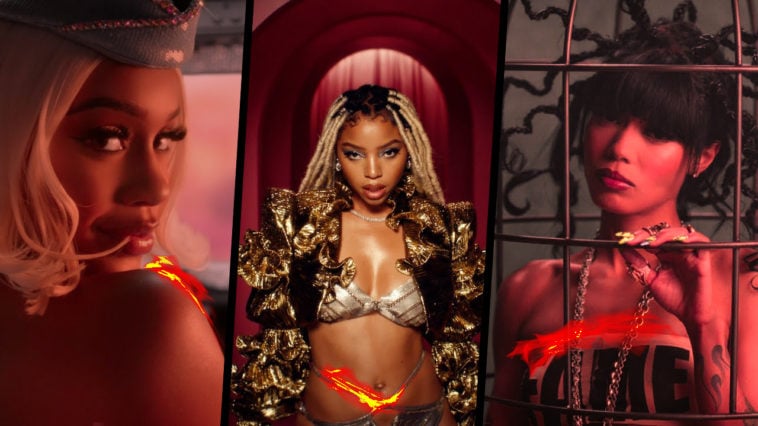 Icy girl can now add “glamour girl” to her list of accomplishments. Saweetie took to Instagram to share her Glamour Magazine cover news with fans.  Channeling her inner Nicki Minaj, Saweetie shows off her colorful hair and unique looks.  You can see more Saweetie teaming up with Glorilla  on the  new summer anthem, “FNF Remix.”  Letssss gooooooooo!!!

It’s about that time for Coi Leray to hit the road with her Trendsetter Tour.  While fans patiently wait for the first show, the “Blick Blick” artist partnered up with Youtube Artist on the Rise for a live performance of her hit track “Anxiety.”

With a new movie on the way, Chloe Bailey is wrapping up her album and needs help from fans to select the next single. The “Treat Me” singer took to Instagram to preview a few tracks from her upcoming album.  Fans  flooded the actress’s comments to express how much they love both records – “Surprise” and “For The Night.”  Either way, we know both singles can be added to her latest hit records!

Yo Gotti’s newest signee, Lehla Samia has been working nonstop since signing to Yo Gotti’s record label. Fans are still talking about the new single she dropped last week.  The first lady of CMG shows she’s just getting started, as she graced the cover of Billboard Magazine. With her label mates Moneybagg Yo,  Blac Youngsta, EST Gee, and the crew beside her, Samia is out here putting on for the females in the male-dominated industry.

After being signed to Lil Baby’s record label 4PF, singer and model Chalynn is proving she’s more than just Jayda Cheaves’ friend. Her debut single “What You Do” has fans wanting more music from the songstress as her voice is described as “unmatched.”

Actress Tiffany Haddish keeps making boss moves, after making her way into the music scene. The comedian can now add author to her list of accomplishments.  She took to Instagram to announce the release of her children’s book “The Last Black Unicorn.”

If you love the raw, sultry sound of Chalynn, we recommend you check out this book of poetry – In My Notes– by self-published author, Tiffany Mason Stewart.

Some fans called her entitled but the “Buss It” rapper, Erica Banks, is proving the haters wrong. With the release of her new single “Throw A Lil Mo,” Banks has fans second-guessing as she shows she has what it takes to take the music industry by storm.

Southern hip-hop artist Renni Rucci is back on the music scene, getting fans hype for more music. Rucci dropped a freestyle that has fans questioning why the “Can’t Be” rapper is not more famous!