Young Thug’s nephew is now in police custody after he allegedly shot his girlfriend in the face, killing her. He now joins Thugger and Gunna behind bars. 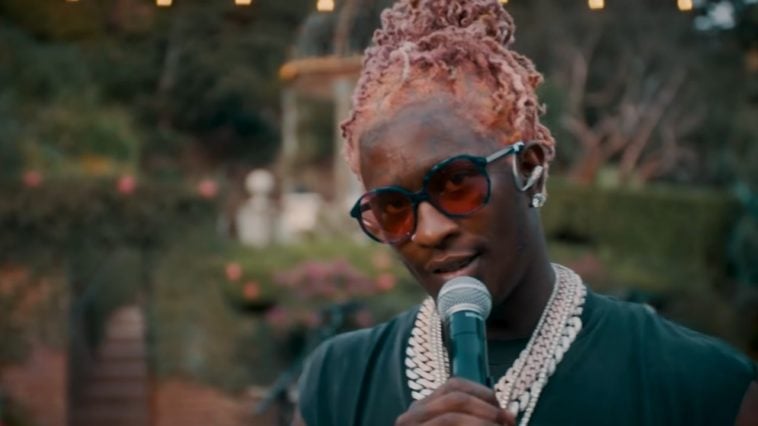 According to a report, Young Thug’s nephew is now in police custody after allegedly shooting his girlfriend in the face and killing her.

The Atlanta rapper’s nephew, Fardereen Deonta Grier, was arrested Wednesday after cops were called to a residence outside Atlanta.

Allyn Glover, East Point PD spokesperson, spoke to TMZ, stating that when officers responded, Grier was crying and his girlfriend, Destiny Fitzpatrick, was dead in a pool of blood by the front door.

TMZ reported that they were informed that, at first, Grier told officers he was fending off two intruders, both masked and armed. Officers then said he eventually admitted to shooting Destiny in the face.

A neighbor had allegedly heard arguing in the residence before the shooting.

Glover then said that Grier told cops he was Young Thug’s nephew, specifically the son of YT’s oldest sister.

An unnamed source who is close to Young Thug confirmed the relation.

Grier has been arrested and charged with murder.

On June 4, Young Thug had his bond hearing before a judge at the Fulton County court.

The question of his bond was discussed with testimony from a stellar lineup of witnesses, including music executive Kevin Liles, a 15-year-old motivational speaker, and community activists who all vouched for the embattled rapper’s release.

Despite it all, the judge denied the rapper’s bond, citing concerns about Thugger being a danger to the community, witnesses, and other people in this indictment.

Judge Glanville began his closing statements by warning against any outbursts in the courtroom.

He then cited testimony from proffers– or witnesses – who stated Thug is indeed the leader of the YSL gang and that he is dangerous.

The judge also referenced a group chat from 2015 in which threats were made to kill anyone who talked to authorities about the gang’s activities.

The judge stated two issues as the concern to court: “Danger to persons and threats to intimidate other witnesses and obstruction of justice.”

The judge said, “There have been significant proffers about Mr. Williams being a danger to the community, particularly to witnesses and other people in this indictment.  That he is the leader of the gang and that he is dangerous.”

Thugger, Gunna, and 26 other YSL members were named in a RICO indictment for murder, assault, robbery, and more.  Gunna was also denied bond and will remain in jail until his trial.

The trial has been set for January 2023.