The girls are taking this summer by storm and making their presence known. From making herstory, dominating the charts, and dropping new heat, there’s no stopping these ladies. 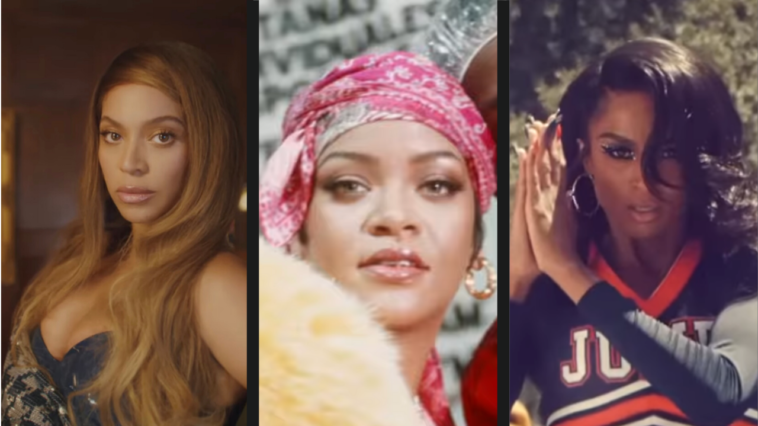 Queen Bey is back, and the Beyhive is buzzing in anticipation for the drop of Renaissance set to release on July 29.

Furthermore, Beyoncè’s “Break My Soul” peaked at No. 7 on Billboard after debuting on June 20.

With one of the strongest comebacks in music history, the Houston native has officially become the first woman to dominate 20 top 10 titles as a solo artist and 10 top 10 tracks as a group member on the Billboard Hot 100 chart.

Lately, Rihanna has been staying under wraps after giving birth to a boy with rapper A$AP Rocky in May.

However, she was recently spotted at a few festivals looking happy, unbothered, and glowing while supporting her bae as he took over the stages.

Although fans are feening to see their beautiful baby boy, they are happy to see the Fenty CEO in good spirits.

After announcing a new record deal  with Republic and Uptown Records earlier this week, Ciara is back with visuals that are totally Jumpin. She took to Instagram to promote her music video to her newly released single “JUMP,” featuring Coast Contra.

Doechii dropped that heat! She took to Twitter to promote her new single, “Bitch I’m Nice.”

The song is banging, upbeat, and perfect for summer.

In addition, this up-and-coming girl group may be new, but they’re coming with that sizzling heat of nostalgia.

The newly emerged girl group FLO has taken the internet by storm.  They became the trending topic today after dropping the music video for their new single “Immature”

With comparisons to R&B icon Aaliyah, Destiny’s Child, and Brandy, fans are loving it!